BOOK THANKS TO THE ANIMALS ALLEN SOCKABASIN 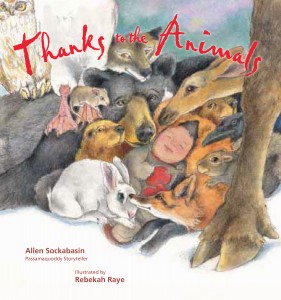 BOOK THANKS TO THE ANIMALS ALLEN SOCKABASIN

In THANKS TO THE ANIMALS, by Allen Sockabasin, Little Zoo Sap and his family are moving from their summer home on the coast to the deep woods for the winter, traveling on a big bobsled pulled by big horses. When Zoo Sap falls off of the sled unnoticed, the forest animals hear his cries and come to shelter him everyone from the tiny mouse to the giant moose to the great bald eagle keeping him warm and safe until his father comes back to find him. Allen Sockabasin is a Passamaquoddy who devotes much of his time to teaching and preserving the Passamaquoddy language. A master musician, he has written, performed, and recorded Passamaquoddy stories and songs. He has been a tribal governor, a member of the tribal council, and director of child welfare for his tribe, and a health educator. He is the father of five grown children and a young son named Zoo Sap. Rebekah Raye is an artist beloved for her bird and animal paintings and sculpture, derived from her affinity with the natural world around her at her studio in East Blue Hill, Maine. She has been interested in animals and art since she was a child in Eastern Tennessee, and now in addition to creating her own works of art, teaches workshops for children and adults. Ages: 6-11