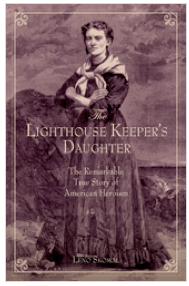 This is the charming, well-written, painstakingly researched story of Ida Lewis, born in Newport, Rhode Island in 1842. After a stroke disabled her father, Captain Hosea Lewis (who in 1853 became the first keeper of Lime Rock Lighthouse), then fifteen-year-old Ida and her mother took over tending the Lime Rock Light from 1857 until 1872, when her father died. Ida is credited with saving 18 or more lives during her nearly 40 years on the tiny island in Newport Harbor. She became famous nationwide in the late 1860s after one of her daring rescues, and the town of Newport celebrated her on Independence Day 1869. In 1879, Ida was officially appointed to the keeper's job and she remained in this job until her death. In 1924 the Rhode Island